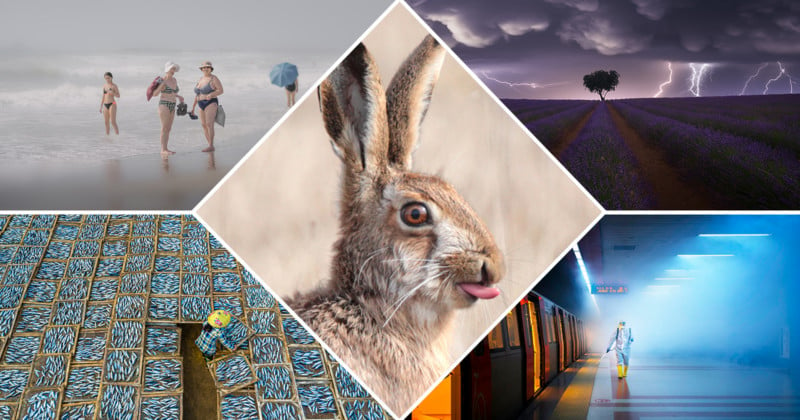 Over 100 photographers had been shortlisted in the rivals along with ten class winners. Each winner is able to get hold of what’s described as “the latest digital imaging gear from Sony” and may go on to compete for the complete open winner that can probably be launched on April 15. That winner will probably be provided with the Open Photographer of the 12 months title and a $5,000 award.

The ten lessons along with the winners and descriptions of the images are beneath.

The above image, by Klaus Lenzen (Germany) is titled The Blue Window, and depicts a ramp of stairs at the Hyatt resort in Düsseldorf ascending in route of a window from which a view of clear blue skies is mirrored. “Seemingly floating in space, the stairs and window are framed in darkish shadows that highlight the design whereas moreover together with a element of surrealism.”

This image was taken by Tamary Kudita (Zimbabwe) and is titled African Victorian, and is a portrait of a youthful black woman carrying Victorian costume and holding typical Shona cooking utensils. “The image probes at stereotypical contextualizing of the black female physique and offers an alternate seen language by method of which a multifaceted African id is obtainable.”

The above image is by Juan López Ruiz (Spain) titled Electrical Storm on Lavender, and is a dramatic {{photograph}} capturing the second lighting strikes a flowering topic of lavender with a solitary tree at its centre, set in opposition to a dusky night time sky. It was taken in the province of Guadalajara, Spain.

This image is by Mariano Belmar Torrecilla (Spain) titled Dias de playa, and depicts a softly focused picture of two women having enjoyable with a morning stroll on the seaside in Alicante, Spain.

This image is by Marijo Maduna (Croatia) titled Girl Vitality, and is a black and white {{photograph}} recording the second when a girl dives off a cliff on the island of Lokrum near Dubrovnik, Croatia, whereas her mates stand-by and watch.

The above image is by Cristo Pihlamäe (Estonia) titled Little Kiss, and is described as “an amusing picture of a hare trying into the topic with its tongue protruding.”

This image is by Kata Zih (Hungary) and is titled Memento, depicting a tailor’s mannequin in an empty room. For Zih, the stillness of the scene evokes a way of solitude and stirs up reminiscences of lockdown.

The above is by Lyudmila Sabanina (Russian Federation) and titled Son, that features a youthful infant sitting on a desk whereas gazing into space, misplaced in contemplation. The {{photograph}} reveals one different side to childhood, one of calmness and reflection.

This image is by F. Dilek Uyar (Turkey) and titled Disinfection, and is described as a cinematic image documenting an employee of the Effectively being Affairs unit of Ankara Municipality in defending gear strolling alongside the put together platform whereas spraying it with disinfectant.

This image is by Khanh Phan (Vietnam) titled Drying Fish. It is a {{photograph}} of a lone woman surrounded by a complete lot of trays of drying fish in the Prolonged Hai fish market in Ba Ria – Vung Tau, Vietnam. Taken from above the pattern, of the fish in trays resembles an enormous piece of materials with the woman seemingly weaving all of it collectively.

This 12 months’s Open rivals was judged by Gastón Deleau, the Director of FOLA in Buenos Aires, Argentina. The winners above and all shortlisted photographers will probably be provided in the sort of a digital exhibition that is on the market to view here starting on April 15.